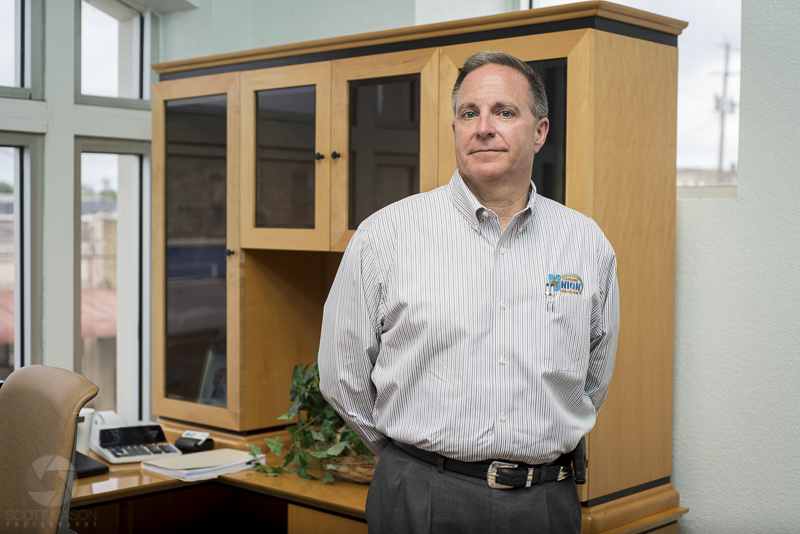 I was recently put on an assignment for a commercial photography shoot of a bank in central Texas.   I’ll be honest, I had never heard of Florence, TX until I was handed this assignment – it’s a small town about an hour north of Austin.  The shoot was to include executive portraits, as well as interior photography.

My client FHL Bank has kept me the months of April-May 2017, and I’d like to thank them for that – they are wonderful people to work with.   It’s nice to be able to shake hands with clients and work with them on-site, as so often I’m creating my photography work all alone.  The solitude can be nice and peaceful, but I love breaking up solo shoots with interactive sessions and photographing portraits as well.

I started with a two interiors of Union State Bank, which was the focus of this shoot.  Union State Bank has been around for a while, a landmark in the small downtown of Florence, TX which lies between Georgetown and Killeen, TX.  Below are several photos from the shoot, along with a brief technical description of the process. 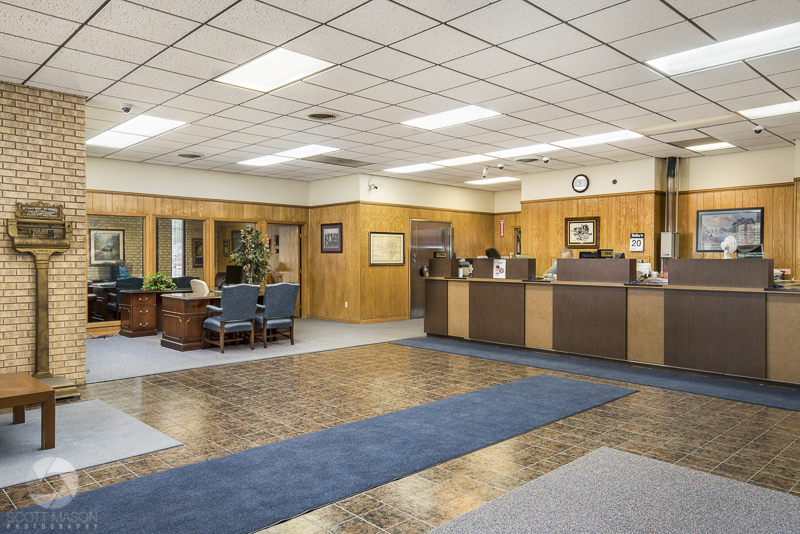 First interior of the bank

Large rooms full of wood paneling/furniture can present quite the challenge when it comes to glare in particular.  My aim here was to cut down on glare and the “too-orange” cast that wood takes on from incandescent lightbulbs as well.  The vault in the rear-center of the image also presented a challenge with glare – shiny steel will always reflect light from a flash in a bright streak, which is nearly impossible to avoid.  Most commonly this issue arises with photographing refrigerators in kitchens.

If you’re a photographer who is interested in overcoming this lighting issue,  I’ve included this video below in which a photographer shows how he fixes the issue, first by getting the exposure corren and then moving the angle of the doors.  Obviously I could not move the vault door in this situation, so I ended up using a bit of Photoshop magic instead. 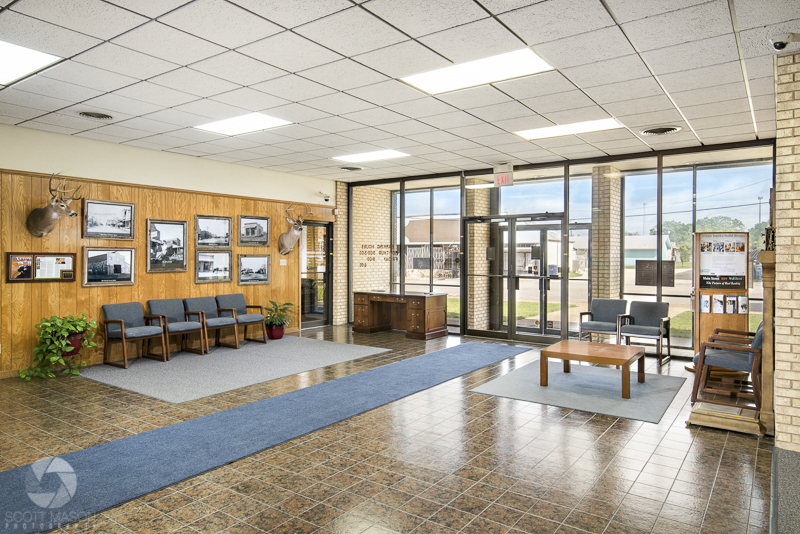 Another interior angle, this time showing the entrance

I took several flash layers for this interior image in order to maker the colors “pop” more as well as to overpower the bright mid-morning light spilling in the windows and causing glare everywhere.  The wooden table in the rear-right of the image was totally blown out from glare which I fixed with the right amount of flash.  The flash layers were blended together and the result above was a nice crisp-looking image.  Blue was added into the sky outside, as the sky had become too blown out to even expose on a separate layer.

Next it was time to move on to the executive portraits.  We didn’t have time to set up any complicated lighting, as the bank exec’ had a lot on his plate that day (we can safely assume he does, every day). So to improvise, I had one of my clients hold the biggest portable flash I had on me with the battery pack attached to my belt.  It wasn’t optimal but when there’s no time to set up light stands, one must improvise!

One of my favorites.

I snapped several photos and tried getting the others in the room with us to crack jokes, in order to loosen my subject up.  The most important thing I’ve found with portraits is not just to add a sense of (tasteful) humor when applicable but to at least talk during the portrait process.  Simple comments between every few clicks is more than enough “These are looking good!” or letting them know what you’re doing “Ok, let’s try a little different lighting now”, “let’s have you switch it up a bit, you can stand here now”.  The WORST thing a photographer can do when photographing a stranger is to not say anything.  Silence can create a sense of tension, and leave the subject wondering if the images are coming out any good – how will they know if you don’t fill them in?  Communication is crucial if one wants to come off as competent, and your subject likely won’t relax unless he/she knows that everything’s going smoothly as planned.

Thank you for your interest in this photo shoot.  If you have a similar need for photography, you can contact us here.

If you don’t have a need at the moment but want to keep in touch for future needs, you can join my monthly newsletter by subscribing below.