We’re all familiar with the “spray and pray” method used to describe novice photographers who snap away obliviously in the hopes that a huge number of carelessly taken shots will yield at least one or two good ones.  It’s something joked about by professionals, but even experienced photographers might find themselves snapping furiously from time to time for whatever reason.

Before the days of digital, photographers paid for each exposure and therefore had to limit how many times they clicked their shutter(crazy, huh?!).  Each negative  cost them, and the time to develop and print was infinitely more laborious than our process for editing digital files today.  Nowadays we have the luxury of snapping as much as we please at close to no cost except for a the space and memory card, which all has become very affordable.

On any given shooting day, you will take hundreds or possibly even thousands of photos. The idea is to pay attention to what is going on in the camera and the frame so that you shoot more “keepers” and have less junk to sort through at the end of the day.  Patience and the process of creating the image have always been essential to every legendary pro, notably nature photographers who are known to spend hours in the same place for in order to capture a prized moment.

Some shoots may require you to be on your feet and think quickly, but that doesn’t mean you should be sloppy.

That’s not to say you shouldn’t shoot a lot of photos, however.  You might feel compelled to snap away to capture a once in a lifetime moment, like the kiss at a wedding ceremony.  As you grow more confident in capturing those moments, you will find yourself snapping at the right time, instead of all the time.  Still, there are moments that warrant a bit of “spraying”. 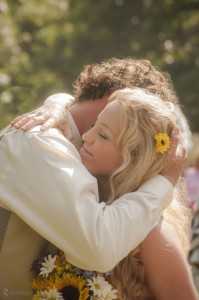 When dealing with portraits, you might want to take at least 2 exposures of each pose just in case one of your subject blinks.

Which brings me to a valuable lesson I learned a long time back:

Remember that if you’re shooting RAW, you’re creating very large files.  Familiarize yourself with the “Busy Writing” light that blinks after your exposure.  It faces you, on the rear of your DSLR: Green light for Nikon, Red for Canon.

With older model DSLRs and low speed memory cards, burst shooting can end up temporarily freezing your camera while it’s catching up to write the files into your memory card.  On my first ever wedding shoot, I hadn’t learned this lesson yet.  I was using an older model DSLR (Nikon D50) which doesn’t write files very fast and the memory card I was using wasn’t up to par with how large the RAW files the camera was producing. I began to snap away furiously during the key part of the ceremony-the exchange of rings and the kiss.  At one point I tried previewing an image on my LCD screen, only to find my camera unresponsive.  I panicked and tried switching it on and off, all to no avail.  I assumed the camera was freezing up, and didn’t even think about it catching up to write the large files. Frustrated and panicky, I popped the battery out, put it back in and began shooting again.

Little did I know I had interrupted the file writing process and damaged every photo from the rings ceremony to about 20 or so after putting the battery back in.  I was devastated when I got home and loaded the images.  Good thing I was only a second shooter and the other photographer had captured everything that I missed.

This experience of mine comes with two valuable lessons:

1.  Learn the limitations of your equipment.

2.  Before jumping into professional gigs, and start out as a secondary shooter at weddings or any event until you have plenty of experience and are comfortable running the show.

To summarize the lesson for those who tend to “spray and pray”: Be conscious while framing and exposing a photo, spend more time on the setup of your image and you will save time in the end.